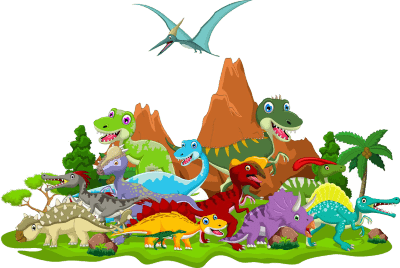 “…And here,” said Miss Jones, “if you’ll step right this way,”
And she pointed to some rather dusty display,
“We are showing a dinkysaur fossil today.
This dinkysaur skeleton’s almost complete
Except for a couple of bones in his feet
And the parts where his legs and his anklebones meet…”

Michael McLiam then let out a yawn
And he thought, “Of the places our classroom has gone
Why THIS is the boring-est trip we’ve been on.

“They haven’t got anything fun or exciting
Like raptors in cages or carnosaurs fighting.
They haven’t got mammoths or saber-toothed cats
Or cavemen with bear skins and primitive bats.
No, nothing exciting at all on display
In the Natural History Museum today.
They just have the curator, boring Miss Jones,
And a dusty display of old dinosaur bones.”

And then Michael said, “Why, I know what I’ll do…
I’ll go out and start my own dinosaur ZOO!

“I’ll find me an island my zoo can call home
With plenty of space for some dinos to roam,
And then, one by one, or perhaps two by two,
I’ll find a few dinos to put in my zoo.
I’ll bring them back home to my island and free ’em
And call it ‘The Dinosaur Island Museum.’

“I’ll get an assistant named Wilbur or Horrace
To help me to capture a brachiosaurus.
This dino’s so big and his neck is so long,
His legs are so thick and his muscles so strong
You have to be sure you don’t look at him wrong.
To calm him, we’ll sing him a lullaby song.
The brachiosaurus’s brain is so small
I’m sure he’ll be sleeping in no time at all.

“We’ll tie him up tightly and set him to float
On the deck of our dinosaur capturing boat.
Just think what the people will say when they see him
At home in The Dinosaur Island Museum.
They’ll say, ‘Why, I’ve never seen anything like it…
A dino so big you could climb up and hike it.
A dino so big you could practically ski him,
All thanks to the hard work of Michael McLiam.’

“But I won’t stop there. No, I’ll have to have more
From places where no one has traveled before.
In swamplands and jungles I’ll go and explore
And bring back a helmeted corythosaur
Who uses the duck-bill he has for a snout
To dig in the muck and to pull the leaves out.
And people will say, ‘Why, it’s hard to believe!
What else do you think Michael has up his sleeve?’

“I’ll go to the farthest of far-away places
And bring back some creatures with very strange faces.
Like a stygimoloch, with a head like a dome;
I’ll capture a dozen and bring them back home.

“I’ll travel the world with occasional stops
To pick up some beast like a triceratops.

A stegosaur too, with those spines on his back
And the long, spiky tail, like a whip he can crack.
You have to be careful he doesn’t attack
So I’ll bring him back home in my stegosaur sack.

“Iguanodons too! Why I’ll catch them in scores!
And maybe a few dozen apatosaurs.

“A few that have armor and clubs on their tails.
And maybe a few that are bigger than whales.
I’ll bring back some dinos that travel in herds,
and some that look something like featherless birds.

“I’ll bring back so many and set them all free
That folks from all over will have to come see.

“They’ll travel from Fairbanks and Juno, Alaska,
From Omaha, Kearney, and Lincoln, Nebraska.
From China, Afghanistan, India too,
From Egypt, New Zealand, Tibet and Peru,
They’ll travel by airplane, by ship and canoe,
By sub and by sailboat to visit my zoo.

“And won’t they be stunned! They won’t know what to say
When they see all the dinos I have on display.
They’ll bring all their friends and their relatives too,
To show them the world’s only dinosaur zoo.

“But that’s not enough. No, not hardly enough!
I’ll have to get some that are terribly tough.

“I’ll head to the desert on one of my treks
And capture the biggest and meanest T. Rex.

“I’ll even come back with a cageful of raptors
To show I’m the bravest of dinosaur captors.
These beasts are so fierce that most people would flee ’em,
But raptors are no match for Michael McLiam.

“When folks see those raptors locked up in their cage
My dinosaur zoo will become all the rage
With people all over, no matter what age.
Old people, young people, teenagers too
Will want to come visit this wonderful zoo.

“And just when they think that I couldn’t get more
I’ll find some that swim and some winged ones that soar
Like an icthyosaur and a dimorphodon.
Then people will say ‘Oh, the places he’s gone!
Just look at the marvelous creatures he’s caught!
We’d gladly pay TWICE for the tickets we bought.
Why this Dinosaur Island’s the world’s greatest zoo!
Is there NOTHING that Michael McLiam can’t do?’

“And when I’ve brought every last dinosaur there
From the desert, the jungle, the sea and the air
I’ll open my Dinosaur Island Museum
And people will flock to my island to see ’em.

“Yes, that’s what I’ll do,” thought young Michael McLiam,
“As soon as we’re done in THIS dusty museum.”

The result was this story, "On Dinosaur Island." Unfortunately, the style was so similar to Dr. Seuss -- that is what he asked for, after all -- that he felt he couldn't publish it or people would just think I was copying Dr. Seuss.

Often, kids will ask me, "What's the longest poem you've ever written." I always tell them it was a poem called "On Dinosaur Island" but that it was never published so they can't read it.

I finally decided that since this poem will never be published in a book, I might as well post it here on the website for you to read. And you can decide for yourself if I succeeded in writing a story in the style of Dr. Seuss.