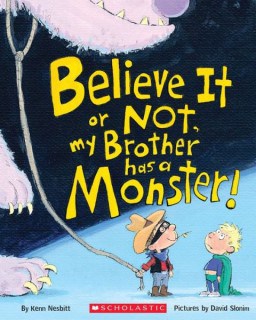 I’m so excited to finally be able to announce the release of my newest book, Believe it or Not, My Brother Has a Monster, published by Scholastic and illustrated by the incomparable David Slonim, the illustrator of such gems as He Came with the Couch, I Loathe You, and How to Teach a Slug to Read.

Believe it or Not, My Brother Has a Monster is of two brothers’ Halloween adventure, and my first rhyming picture book. The older brother finds a monster and brings it home, along with many, many other creepy-crawly creatures, including spiders, rats, toads, black cats, ravens, and more.

It happened just last Halloween,
the weirdest thing you’ve ever seen:
My brother went out after dark
and found a monster in the park.

He led it home and snuck it in
which gave me goose bumps on my skin
to see a monster standing there.
Those giant claws! That shaggy hair!

I had to struggle not to shout.
I hope our parents don’t find out.

With each creature the brother brings home, the mayhem in his room only increases, much to the dismay of the younger brother. What will happen when the parents finally discover what these boys have been up to? Without giving away the ending, let’s just say it’s a joyful surprise with a satisfying twist. 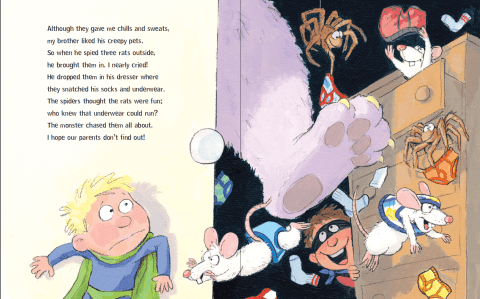 Here are links to a few reviews of Believe it or Not, My Brother Has a Monster: