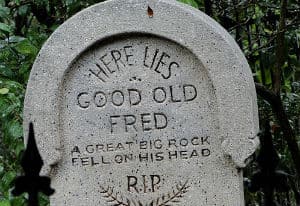 Sometimes a funny epitaph poem can teach a lesson about unhealthy habits. Here’s an example in which a vegetable-hating kid learns that too many sweets can be very bad for you:

Chocolate is Not a Vegetable

Here lies poor Billy.
Although it sounds silly,
he never ate anything green.
The candy that filled him
is also what killed him
the day after last Halloween.

Now it’s your turn. Want to try your hand at writing a funny epitaph poem? You could even write one about an imaginary version of yourself who dies from indulging in one of your own bad habits. First, think about some bad habits that you have, such as:

Choose one of these habits to write about in your funny epitaph. You can use your own name or make up a funny new name.

As you saw in the two examples above, there are two different ways to start an epitaph poem. You could start yours like this:

Or you could start it this way:

Do a first draft of the poem without worrying about rhyming anything. Just come up with four lines that tell a very short and funny story about a bad habit that was so bad, it killed you. Once you have a draft of the poem, you can brainstorm rhymes that fit into the poem you’ve written. Remember, you really only need one pair of rhyming words (the end words of the second and fourth lines).

If you’re stuck, then you can try doing it backwards by finding the rhymes first and then filling in the rest of the story. To do it this way, just focus on one key word that’s related to the bad habit, such as the word “green” in the poem about never eating vegetables. Then think up some great rhymes for that word, and pick one that can fit into your story. In the vegetable poem, “Halloween” was a good rhyme for “green,” so the idea of eating candy instead of vegetables became the core of the story.

Want to have even more fun? Challenge your friends to see who can create the funniest and most outrageous epitaph poem. You could even put on an epitaph poetry reading with dramatic interpretations of each poem.

(Just be careful not to overdo it… Did you hear the one about the kid who wrote too many poems?)