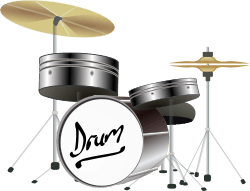 When you read rhyming poetry, one of the things you might notice is how the words often have a nice rhythmical quality. That is, there is a pattern to the rhythm of the words that makes them fun to say and easy to remember. Sometimes the rhythm is a simple one, and sometimes it’s more complex, but it’s not there by accident. Poets arrange their words in such a way as to create those rhythmical patterns.

Over the next several lessons, I’m going to show you how to identify the rhythms in poems and how to write rhythmical poems of your own so that others will enjoy reading them.

You probably know that, in music, the rhythm of a song is the “beat,” often created by instruments such as drums, bass guitars, etc. In fact, in popular music the drummer and bass guitarist in a band are often referred to as the “rhythm section” because they establish the rhythm for the rest of the musicians to follow.

Unlike a song, poems don’t have a rhythm section. There is no drummer or conductor establishing the rhythm. Instead, the rhythm is set by the “stresses” or “accents” in the words themselves. Allow me to explain.

If a word has just a single syllable, that syllable might be stressed, or it might not be. Generally, short words like “a” and “I” and “the” are not stressed. Nouns and verbs (things and action words), on the other hand are often stressed, even when they are just one syllable long. So, for example, words like “cat” and “jump” are stressed syllables.

The easiest way to tell if a word is stressed or not is to put it in a sentence and then read it aloud. Listen carefully to how you pronounce it to see if you can tell which words or syllables are stressed and which ones aren’t.

Let’s take a look at an example. Read the following line and see if you can hear the stressed syllables.

My mother ate an apple and my father ate a pear.

my MOTH-er ATE an AP-ple AND my FATH-er ATE a PEAR.

Now can you hear it? I hope you can see that, by writing your words in such a way that they form repeating patterns of stressed and unstressed syllables, you can add rhythm to your poems.

In music, we refer to the beat of a song as its rhythm. In a poem, however, the rhythm created by stressed and unstressed syllables is called its “meter.” The dictionary defines meter as “arrangement of words in regularly measured, patterned, or rhythmic lines or verses.”

The last thing I want you to know about in this lesson is “feet.”

(Of course, when you write poems, you don’t want to write them in UPPER and lower case letters with lines between the feet; that would make your poems pretty hard for people to read. I just do it here so that you can see the stresses and the feet.)

Oh, and one more thing: Poems can have any number of feet in their lines. The important thing is to pick a pattern and stick with it. When you write poems, your lines can have as few or as many feet as you like. For example, here’s a very short poem I wrote in which each line has just two feet:

If I were to write it to show you the stresses and the feet, it would look like this:

One of the biggest challenges for new poets is learning to say things rhythmically. You might write a line, only to discover that it doesn’t have a rhythm, or it doesn’t have the same rhythm as the other lines in your poem. When this happens, you should see if you can say the same thing in a different way, in order to create the rhythm you are looking for.

For example, let’s say I wrote the following line:

My mother said I should go to the store

(my MOTH-er SAID i should GO to the STORE)

If we look at which syllables are stressed and which ones aren’t, we’ll see that the rhythm doesn’t stay the same for the entire line.

However, we can easily rewrite the line like this:

My mother sent me to the store

(my MOTH-er SENT me TO  the STORE)

Next lesson: You Can Scan, Man