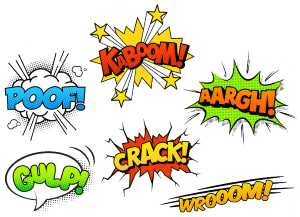 Using onomatopoeia in a poem can engage the reader’s senses with more vivid imagery and heightened sensory impact, without having to use additional words. If your poem contains actions, it’s a good idea to include onomatopoeia in your writing. Let me give you an example. Let’s say you were writing a poem about skiing and you said:

Skiing down the snowy hill

This describes what you are doing, and the reader can certainly visualize it. But what if, instead, you said:

Swooshing down the snowy hill

Do you see how this evokes the sense of sound? If gives the reader not just a visual image of the skier, but also the sound that their skis make on the snow, and perhaps even the side-to-side motion of the skis, all without adding extra words.

Poetry is often described as “condensed language,” meaning that it tries to convey as much meaning and feeling as possible with few words. If you are writing prose—stories, essays, etc.—you still want to be concise; to avoid using unnecessary words. But it’s also okay to be as descriptive as possible.

In poetry, on the other hand, the more meaning or emotion you can pack into just a few words, the better. With onomatopoeia your words can do double duty, conveying both meaning and sensation. Take a look at this excerpt from my poem “What to Do with a Dinosaur” from my book Revenge of the Lunch Ladies.

This morning a dinosaur tromped into school,
ferocious, atrocious, and dripping with drool.
He had to be practically twenty feet tall,
and banged around looking something to maul.

He stomped and he snorted, he bellowed and roared.
His head hit the ceiling and busted a board.
That beast was undoubtedly ready for lunch.
He snatched up a chair in his teeth with a crunch,

I’ve underlined the onomatopoeia words in these two stanzas to make them easier to spot. As you can see, these words not only describe what the dinosaur is doing, but they evoke the sounds he is making as well. Without the onomatopoeia, it would lose a lot of its impact, as you can see below.

This morning a dinosaur came into school,
ferocious, atrocious, and covered with drool.
He had to be practically twenty feet tall,
and walked around looking something to maul.

In other words, as you write, and as you edit and revise your poems, look for opportunities to replace your verbs with ones that also evoke sounds.

If you are writing rhyming poetry, sometimes you may even want to rhyme some of your onomatopoeia words. To make this as easy as possible, I have created a list of rhyming onomatopoeia words, such as bash / crash / smash, and growl / howl / yowl.

You can write as many lines as you want like this. Then all you need is an ending. Here are a couple of ideas:

These are sounds I heard at home.
My house sounds just like a poem.

Or how about this one?

This is not some great idea.
It’s just onomatopoeia.

Now it’s your turn. If you can add a few more lines of onomatopoeia words to this, and maybe even come up with a different ending, you’ll have created your very own “onomatopoem.”

Learning More about Onomatopoeia in Poetry

If you want to learn even more about onomatopoeia in poems, here are some useful lessons: