You’re going to love learning how to write clerihews. Why? Because clerihews are funny poems you write about specific people. That means when you learn to write a clerihew, you can instantly write funny poems about your parents, your teacher, your favorite movie star, your best friend, your pet, or anyone else you can think of.

Let’s look at an example. Let’s say your art teacher was named Mr. Shaw, and you wanted to write a clerihew about him. You might start your clerihew like this:

Our art teacher, Mr. Shaw,
Really knows how to draw.

Notice that the first line ends with the name of the person the clerihew is about, Mr. Shaw. The second line ends with “draw” because it rhymes with “Shaw.”

To finish the clerihew, you need to write two more rhyming lines. In a well-written clerihew, those next two lines will make the poem funny, like this:

Our art teacher, Mr. Shaw,
Really knows how to draw.
But his awful paintings
Have caused many faintings.

The music of Katy Perry
Is kind of scary.
I heard it and sniffed,
“I much prefer Taylor Swift.”

And you don’t have to limit your clerihews to real people. You can even write clerihews about characters from books, movies, comics, cartoons, etc. Here’s an example of a clerihew about a character from a book:

The enemy of Harry Potter
Was a scheming plotter.
I can’t tell you what he’s called; I’d be ashamed
To name “he who must not be named.”

So you see, clerihews are short, easy to write and can be about any person or character, real or not. They can be about people you know, people you don’t know, or even about animals, cartoon characters, rock groups, or anyone else you can think of. 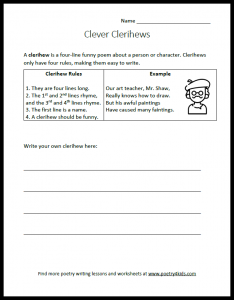