Buy the book My Hippo Has the Hiccups

Willie had a stubborn wart
upon his middle toe.
Regardless, though, of what he tried
the wart refused to go.

So Willie went and visited
his family foot physician,
who instantly agreed
it was a stubborn wart condition.

He poked it with a pair of tongs.
He pulled it with his tweezers.
He held it under heat lamps
and he crammed it into freezers.

Regrettably these treatments
were of very little use.
He looked at it and sputtered,
“Ach! I cannot get it loose!

“I’ll have to get some bigger tools
to help me to dissect it.
I’ll need to pound and pummel it,
bombard it and inject it.”

He blasted it with gamma rays,
besieged it with corrosives,
assaulted it with dynamite
and nuclear explosives.

He hit the wart with everything
but when the smoke had cleared,
poor Willie’s stubborn wart remained,
and Willie’d disappeared.

From the book My Hippo Has the Hiccups 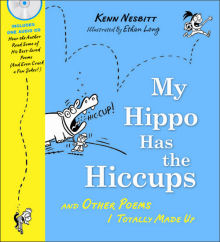