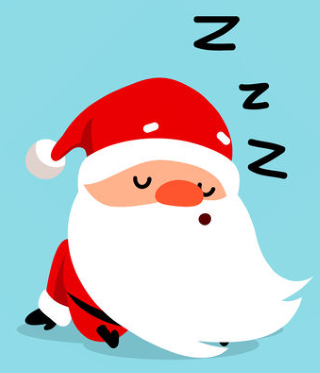 This Christmas poem is all about an “idiom.” In case you don’t know, an idiom is an expression whose meaning is not predictable from the words used. For example, to “kick the bucket” means to die, and to “let the cat out of the bag” means to reveal a secret. If you were just learning English, you might not be able to decipher the meanings of these expressions and would need to look them up or have someone explain them to you.

In this poem, the idiom I used is the very last line of the poem, and the humor is in the fact that it has two different meanings, depending on how you look at it.

If you would like to read more poems that use common idioms, have a look at the “Poems by Poetic Technique” page on poetry4kids.com.

I woke this Christmas morning
and, much to my surprise,
a sleeping, snoring Santa Claus
was there before my eyes.

It seems he was exhausted
from staying up all night,
delivering his presents on
a long and tiring flight.

He made it to our fireplace,
before he fell asleep,
but couldn’t take another step
and crumpled in a heap.

And there he slumbered soundly.
He slept the night away,
until I came upon him on
in the hearth on Christmas day.

My puppy started barking.
My sister gave a yell.
But Santa didn’t hear a thing
as far as I could tell.

He didn’t feel me shake him.
He didn’t hear the dog.
So Santa’s at our house this morning,
sleeping like a log.