Goats are incredibly curious creatures. They love to explore their surroundings and chew on the things they find. If you put your hand near a goat’s mouth, it might even chew on your sleeve to see what it tasted like. This has led to the idea that goats will eat anything, including garbage and tin cans.

In fact, a park in the city where I live, Spokane, Washington, even has a statue of a garbage-eating goat with a built-in vacuum cleaner that will suck up any trash you hold in front of its mouth. 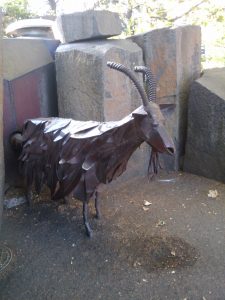 While it isn’t true that goats will literally eat tin cans, they might nibble on one just to see what it was. If a goat found his way into a garbage dump or landfill, he might not find much actual food, but he would probably nibble on a lot of things he was curious about.

In his book Something Big Has Been Here, Jack Prelutsky wrote a poem called “A Goat Wandered into a Junkyard” about a goat who ate enough used car parts to eventually cough up an automobile.

Recently, I got to thinking about what other things a goat might eat and what that might lead to. For example, if it ate a computer or a smartphone, might it connect to the internet and become the world’s smartest goat? (I didn’t use that idea because it was too similar to my poem “My Brother Ate My Smartphone.”)

What if it ate your homework? (I didn’t use that idea because I’ve already written quite a few poems about homework being eaten, including “My Dog Ate My Homework” and “My Teacher Ate My Homework.”)

Finally, I wondered what would happen if it ate a book or a movie. Would it enjoy the story? And that led to the idea for this poem.

A Goat in a Landfill

A goat was in a landfill
eating garbage and debris
and came across a movie;
a discarded DVD.

He chewed the case and cover
and the flavor made him smile.
He took the disc between his lips
and nibbled for a while.

He thought, “This film is brilliant;
full of action and suspense.
The story is exciting
and the fight scenes are intense.

“It’s got a lot of comedy,
a touch of sweet romance,
and music so inspiring
it makes me want to dance.”

He gnawed a little longer
through some drama and a chase,
and finished off the movie
with a grin upon his face.

He gulped the closing credits —
one more bite was all it took —
and thought, “That film was awesome
but I still preferred the book.”