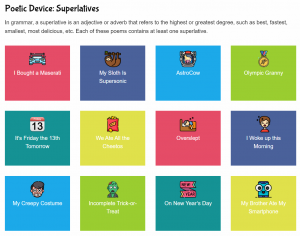 As I was writing a new poem today, about the hottest food ever, I realized that “hottest” is a superlative. Superlatives are a form of adjective or adverb used to describe the highest or greatest degree of comparison. For example, small is an adjective that describes the size of something. Smaller is the “comparative degree,” meaning it is more small than the first item being described. And smallest is the superlative degree, meaning it is the most small.

Most superlatives in English follow the convention of adding -er for the comparative and -est for the superlative, such as fast, faster, fastest. But there are exceptions that don’t follow this rule, such as good, better, best, or bad, worse, worst.

There are other exceptions where you simply add the word more or most before the word. These are usually with adjectives/adverbs that are at least three syllables long. For example, to compare various degrees of beauty, would not say beautiful, beautifuler, beautifulest. Instead, you would use beautiful, more beautiful, and most beautiful.

I thought it might be useful for teachers and students if I could easily provide a list of all of my poems that contain superlatives, including strangest, tastiest, richest, fastest, and so on. So here it is!

If you would like a little challenge, read some of the poems on the Poetic Device: Superlatives page and see if you can locate the superlative (or superlatives) in each poem. Just remember: Some will end in -est, some won’t (like worst) and some will use the word most (like most famous) to form the superlative.

And if you would like to find poems that use other poetic techniques, such as alliteration, onomatopoeia, etc., simply visit the Poems by Poetic Technique page for a list of many of the different literary devices I use in my poems.