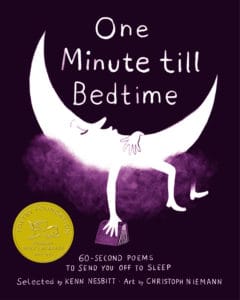 I’m thrilled to announce the release of my newest book, One Minute Till Bedtime. This is the first anthology that I have put together, and it has already received starred reviews from Kirkus, Publishers Weekly, and School Library Journal, plus it has been selected by Publishers Weekly as a Best Book of 2016.

One Minute Till Bedtime contains over 140 brand-new poems from more than 130 poets from around the world, including such luminaries as Jack Prelutsky, Jane Yolen, Jon Scieszka, Joyce Sidman, Judith Viorst, Lemony Snicket, Marilyn Singer, Nikki Grimes, and many, many others. Each of the poems in this collection–all perfect for bedtime–can be read in about a minute. With seven sections, each with roughly twenty poems, One Minute Till Bedtime holds a full week of 20-minute sleepytime readings.

The beautiful hardcover book is whimsically illustrated by the incomparable Christoph Niemann, whose witty, minimalist drawings compliment and enhance the poems, giving readers even more to ponder as they get ready to dream.

One Minute Till Bedtime is now available in the US wherever books are sold, including:

It is also available for purchase now in Australia: 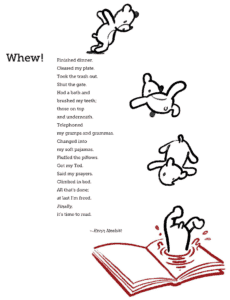