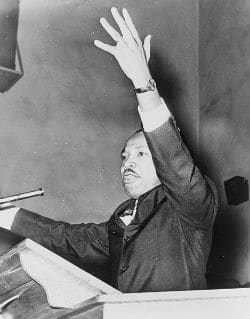 Martin Luther King, Jr. was an incredible orator, harnessing the power of words rather than weapons as he lead this country on its road to civil liberty.  In fact, many of his speeches have the power of poetry, using some of the same conventions writers use when composing poems: alliteration, personification, simile, repetition, metaphor, and even rhyme.  So, what better way to celebrate Martin Luther King Day than with words?

Here are some examples of poetry based activities you can do to commemorate Martin Luther King, Jr. on the third Monday of each January…  or any time you feel so inspired!

In Martin Luther King Jr.’s famous 1963 “I Have a Dream Speech,” he uses repetition to drive home his talking points.  This kind of convention not only works to emphasize key phrases, but it also gives the writing a nice cadence.  Below is an excerpt from that speech that I have organized into a poetic form.

From where else could freedom ring?  Your playground?  Your classroom?  The library… or maybe even your own heart?  Try writing a poem in which each line begins with “Let freedom ring…”

Activity Two:  Stand Up for Your Cause

Doctor King was a leader in the cause of civil liberty.  What cause do you hold dear to your heart?  There are many social inequalities that people are passionate about:  Woman’s rights, the right to health care, animal welfare, anti-bullying, ending hunger, and many more.  In this activity, choose a cause that gets your heart pounding and write a poem about it!

Sometimes it’s tough
to speak your mind.
The going’s rough
to get behind
the kid who’s teased and kicked around,
to pick him up when he is down.

Dr. King uses poetic language throughout his speeches.  Try reading through one or more of his most famous ones, and pull out one section that really sound like a poem to you.  Arrange it on paper in a poetic format.  You do this in several ways:

A poem
that is all
about a mountain
may get taller in the middle
and then shorter on
the ends so that
it takes on the
mountain’s
shape.

Here is an example of finding a poem in one of Dr. King’s speeches.  This excerpt is from “The Birth of a New Nation.”  I have rearranged it to show emphasis and rhyme.

There is a great day ahead.
The future is on its side.

It’s going now through the wilderness,
but the Promised Land is ahead.

After completing one or more of these activities as a class or group, get together and have a reading on Martin Luther King Day, because sometimes words take on their greatest strength when spoke aloud.