Happy birthday to the master of the spooky story, Edgar Allan Poe. On January 19th, we celebrate the life and work of this legendary poet and author. From his poem “The Raven” to his short story “The Tell-Tale Heart,” Poe’s works have captivated audiences for centuries with their dark imagery and symbolism. While he did not write for children, his poems, especially “The Raven,” have been enjoyed by young readers for nearly 200 years. 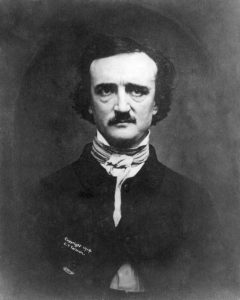 Edgar Allan Poe was a 19th century American author, poet, editor, and literary critic whose works are renowned for their dark and mysterious themes. Born on January 19, 1809 in Boston, Massachusetts, Poe was orphaned at a young age and was taken in by the Allan family, from whom he adopted his middle name. Poe’s early life was marked by financial difficulties and personal tragedy, which would later be reflected in his writing. 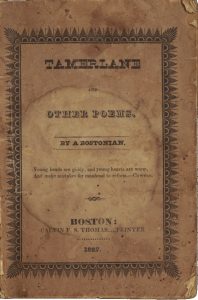 Poe began writing poetry at a young age and published his first collection, Tamerlane and Other Poems, in 1827, when he was just 18, under the pseudonym “A Bostonian.” Only 50 copies were printed, just 12 of which still exist today. The book received little attention so, though he continued writing poetry, he began to focus more on short stories. Poe also joined the United States Army in 1927, and later the United States Military Academy, but left in order to focus on his writing career. 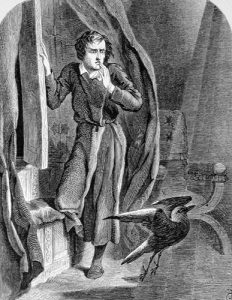 In 1845, a few days after his 36th birthday, Poe published his most famous poem, “The Raven,” which tells the story of a man visited by a talking raven, who repeatedly utters the word “Nevermore.” The poem became a sensation and made Poe a household name. “The Raven” is often considered one of the most famous and best known poems in American literature. It begins…

Once upon a midnight dreary, while I pondered, weak and weary,
Over many a quaint and curious volume of forgotten lore—
While I nodded, nearly napping, suddenly there came a tapping,
As of some one gently rapping, rapping at my chamber door.
“‘Tis some visitor,” I muttered, “tapping at my chamber door—
Only this and nothing more.”

Poe’s poetry is characterized by its heavy focus on death and the supernatural. He was a master of the “gothic” style, and many of his poems, such as “Lenore” and “Annabel Lee,” deal with themes of death, loss, and the afterlife.

In addition to poetry, Poe also wrote short stories, essays, and criticism. In 1841, he wrote a short story called “The Murders in the Rue Morgue,” which is widely considered to be the world’s first detective story, in which a brilliant detective solves a seemingly impossible case. He is often referred to as the father of the detective genre.

He is also widely considered to be the father of modern horror. His short stories, such as “The Tell-Tale Heart” and “The Pit and the Pendulum,” were renowned for their inventive plots and use of psychological terror. Poe’s works, with their mysterious and scary themes, had a huge influence on later writers, particularly in the horror, detective, and science fiction genres.

Poe’s life was marked by personal tragedy and financial difficulties. In addition to losing his parents at a young age, his first wife died when she was just 24, and he often struggled to earn enough money. Poe himself died at the young age of 40, under mysterious circumstances. There are many different theories about the cause his death, but we may never know for sure.

Despite the hardships he faced during his lifetime, Edgar Allan Poe is considered to be one of the most influential American writers of all time. His legacy lives on through his enduring works of poetry and prose. His writings continue to be studied, analyzed, and adapted in various forms of media, including movies, TV shows, and other literature. Poe’s writing had an immense impact on the horror and science fiction genres, and his works continue to be a source of inspiration for many poets, short story writers, and novelists to this day.