Welcome students and teachers! December 30 is the birthday of Charles Edward Carryl, a renowned American author who wrote many books for children (and one about the stock market just for adults). He is best known for his fantastically silly children’s novels and poems, which have been enjoyed by generations of young readers. 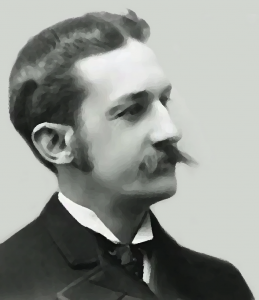 Carryl was born in New York City in 1841 and grew up in a household filled with books and a love of literature. His parents were very supportive of his writing ambitions from an early age; they encouraged him to read widely and express himself through literature.

As an adult, he became a successful businessman and stockbroker. He married his wife, Mary Carryl, in 1869 and they had two children, Guy and Constance. (Guy even became a famous humorist and poet in his own right, but that’s a story for another day.)

However, it was his love of literature and poetry that ultimately became his lifelong passion. Carryl began writing poems and stories for his own children in the 1870s. Once he began publishing them in the 1880s, his work quickly gained popularity due to its wit, charm, and ability to capture the imagination of young readers. His first novel, Davy and the Goblin, was published in 1885 and is still considered to be a classic of nonsense literature. 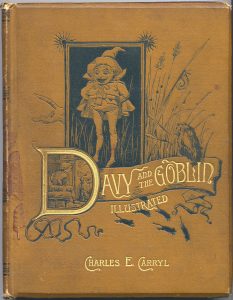 Carryl’s poems were particularly popular with younger audiences due their whimsical nature combined with moral lessons that could be learned throughout each poem, often featuring animals or mythical creatures like fairies or elves. Many themes explored in his writings include friendship, loyalty, bravery, and courage but also cautionary warnings against vanity and pridefulness among others topics relevant even today.

Perhaps his most famous poem is “The Walloping Window-Blind,” a nonsense poem published in 1885, and written in a style very similar to that of Lewis Carroll, the author of Alice in Wonderland. Like Lewis Carroll, Charles Carryl included many poems in his novels for children, including “The Camel’s Complaint” (also known as “The Camel’s Lament”) from his second novel The Admiral’s Caravan: A Tale Inspired by Lewis Carroll’s Wonderland.

Carryl was a talented and influential author and poet who made a lasting impact on the world of children’s literature with his wit, charm, and ability to capture the imagination of young readers. His poems and stories continue to be enjoyed by generations of children. You will find several of them on the Classic Poems page on this site.

He left behind a legacy filled with timeless works suitable not only for kids but people of all ages looking into get lost in fantastical worlds, so why don’t you give one (or two!) of these pieces ago? You won’t regret it!