Let’s take a look today at the life and work of Carl Sandburg, one of America’s most beloved poets. Carl Sandburg was a renowned poet, historian, and biographer. Born on January 6, 1878 in Galesburg, Illinois, Sandburg was the son of Swedish immigrants. He grew up in a poor family and had to work various odd jobs to make ends meet. Despite this, Sandburg was a voracious reader and developed a love for literature at an early age. 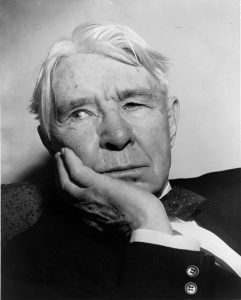 After working as a milk-cart driver, a hotel porter, a bricklayer, a farmhand, and a coal-heaver, he eventually became a journalist, writing for the Chicago Daily News.

Sandburg began writing poetry in his teenage years and published his first collection in 1904, at the age of 26. In 1916, he published a book of poetry called Chicago Poems. This collection, his first from a mainstream publisher, contained some of his most famous works, such as “Chicago” and “Fog.” It was met with critical acclaim and established Sandburg as a major figure in American literature. His next collection, “Cornhuskers,” won him the first of his three Pulitzer prizes. 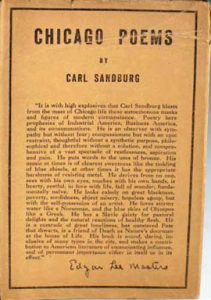 In addition to his poetry for adults, Sandburg was also known for writing stories and poems for children. He wrote three books of stories for kids between 1922 and 1930; Rootabaga Stories, Rootabaga Pigeons, and Potato Face. These were collections of whimsical and imaginative tales that were meant to be read aloud to children. The stories, which featured characters such as the “Piggyback Hound” and the “Corn-Stalk Boy,” were meant to appeal to the childlike sense of wonder and imagination in all of us. 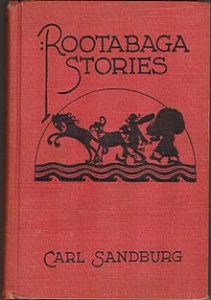 Sandburg’s poetry for children was known for its simplicity and accessibility, as well as its ability to convey complex themes in a way that children could understand. One of his most famous children’s poems is “Theme in Yellow,” from Chicago Poems, about the things a jack-o-lantern sees on Halloween night.

Another example is his poem “Fog,” also from Chicago Poems, which compares the fog covering the harbor and city to a silent cat.

It sits looking
over harbor and city
on silent haunches
and then moves on.

He also wrote a number of children’s poems that were discovered in 1999, 32 years after his death, and published as a book entitled Poems for Children Nowhere Near Old Enough to Vote. 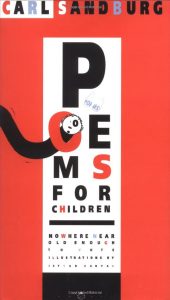 One thing that stands out about Carl Sandberg’s poems is their timelessness; their ability to transcend generations. His poems have remained popular among both young readers today and those who grew up reading them decades ago.

In addition to his poetry, Sandburg was also a historian and biographer. He wrote a Pulitzer-prize-winning multi-volume biography of Abraham Lincoln, which was published in the 1950s and is still considered one of the most comprehensive and well-researched biographies of the former President. 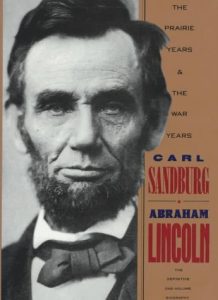 Carl Sandburg died on July 22, 1967, at the age of 89. His work, especially his poetry for adults and children, has had a lasting impact on American literature and continues to be widely read and admired today.